﻿
Sunrex Technology Co., Ltd.
×
We use cookies to provide you with better browsing experience and business services. If you have questions or want to know more, please read us “ PRIVACY STATEMENT ”.

Sunrex has a solid sense of social justice for the future.

Located in the central area of Africa, the Democratic Republic of Congo (DRC) has the world’s richest gold deposits. In addition, Congo’s underground is also rich with diamonds, colored metals, and rare metals resources, which is why Congo is also called the “Geological Miracle.” With such abundant natural resources, Congo should have been a rich and prosperous country, however, decades of fighting over these natural resources has resulted in continuous civil war in Congo, in which more than 4 million of Congo’s people have lost their lives. In Congo, local armed forces and multinational companies collude to force local civilians to work in mines, sometimes even refusing to pay them for their work. These local armed forces and multinational companies have made fortunes, while the people of Congo suffer from inhumane torture.
The head of the “Global Watch” international organization, Patrick Airey, says: “This is called the resource curse. From the colonial period to the present, Congo (DRC) has always been just a temporary storage ground for its rich resources, its people have never been the real beneficiaries of these resources.”
This is why the rare metals that come from this area, including cassiterite, wolframite, coltan, and gold are referred to as “blood minerals” by the press. These metals are used in information and communications technology products that we are familiar with, such as mobile phones and laptop computers.

Metals have a variety of sources, including recycled metals, mined metals, and inventory metals, whereas mined metals are the predominate source. Using tantalum as an example, the following diagram shows its main sources: 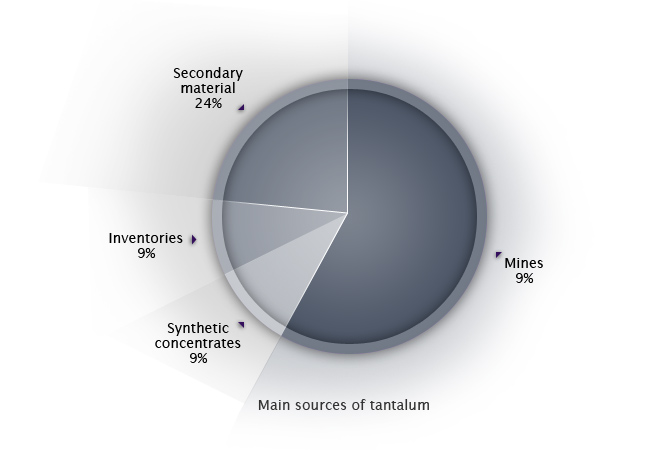 Metal mining has brought enormous economic benefits to developed countries and developing countries by, for example, accelerating economic growth, improving quality of life, and optimizing public infrastructure. On the other hand, mining has in many ways also brought about many negative effects on society and the environment. We must understand that the benefits brought about by mining are actually obtained at the expense of many social and environmental issues.

The human rights violations and conflicts caused by mining in the Democratic Republic of Congo has already resulted in great concern from the Electronic Industry Citizenship Coalition (EICC) as well as the Global e-Sustainability Initiative, and they have established a work team to better understand the effects mining operations have on society and the environment, and to decide if and how to take action to improve these work environments.
Make IT fair is a new online group formed by organizations from all over Europe, which has called upon companies such as Sony, Nokia, HP, and Philips to be aware and show concern for the potential moral and environmental risks that arise from their metal raw materials procurement processes.
Furthermore, the Dutch organization SOMO has also investigated these issues and has disclosed many existing issues regarding the health and environmental problems associated with the local miners. SOMO’s Esther de Haan says, although consumer electronics products are and important consumer of many metal raw materials, many of these metal raw materials are mined and produced in high-risk countries such as China, Russia, and Africa. The consumer electronics industry has not directly mined these metals. To this day, they have still not attempted to investigate the source of these metal raw materials, but we will make sure that they show concern for the origins of their metal raw materials and ensure that the IT industry treats fairly all the people around the world.

Donations are welcome, this is very helpful.